Come Close. But Not That Close. 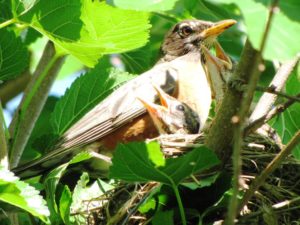 Lately in the mornings, when I come downstairs and push open the living room curtains to greet the day, I realize an instant too late that chickadees or sparrows or wrens or even an occasional grosbeak were breakfasting at the feeder outside the picture window, and my rushed movement scatters them.

Nuts. I would have stilled myself to watch them. So I learn to peak through the weave of the fabric, looking for visitors, before my morning efficiency chases them off.

Yesterday I walked through to the dining room, where I had finished an ambitious project but not quite put it all away. The severity of the thud against the patio door jolted me, and I honestly expected a rock. What I saw was a mass of feathers and escaping ascending doves. Bits of gray stuck to the glass, and I approached.

And there it was. While the other birds flew off, a robin had dropped to the patio stone twelve inches from my door, on its back, feet up.

As much as I crave close-up encounters with birds, this is not what I have in mind. I want birds to come close, but not this close, and not this fast, not with this consequence. Stunned? Injured? Dead?

When I’m out walking and come across a deceased bird in the street, usually already dirt-covered and shriveling, I feel a pang of “poor thing” and a moment of wondering what happened, but I don’t feel the responsibility to give it a proper burial. This was different. I didn’t really know what to do.

The interwebs told me it could take two or three hours for a stunned bird to recover. The interwebs also said hypothermia was dangerous, and we’d just had snow the night before and the temperature was barely above freezing.

My sister was texting me about the delight of her daughter having chosen her wedding dress. My husband told me what time the Cubs game was going to start. I got an alert from the grocery store about the status of my delivery. Life was going on while I was watching this bird and Googling.

Then the robin moved. While I had been looking at my phone, it had turned over and was no longer on it back in the death pose. A good sign, surely! The head lifted a few times. The wings twitched. More good signs. A few minutes later, while I was on the phone with a birdwatching friend, it rotated 90 degrees. I held off on finding gloves and a box to shelter it. Then it laid its head down in an odd position and stopped breathing.

Eventually I did find gloves, a small shovel, and a couple of bags. I certainly had the closest look at a robin I’ve ever had. I also saw that at least one leg was so mangled it would have been beyond my care, and something was wrong with the neck. I don’t think the poor thing ever had a chance.

Robins in my yard, both front and back, has been a new thing this year. I saw a few more later in the day. Were they looking for their friend? While I am no expert birdwatcher, seeing birds at my feeders or darting around the yard, and hearing them chirping and singing when I’m outdoors, buoys my spirit.

Birds hit windows all the time. I know that. They die in yards and streets all the time. I know that too. Yet my rollercoaster of feelings, from being startled by the sound of this one crashing against my glass, to the anxiety about whether this would be the time the bird recovered, to the sadness of gently scooping it up on a shovel and sliding it into a bag while also in wonderment at its creation, dazed me.

I also couldn’t help thinking about how we ride the same rollercoaster in our relationships with people. Come close—but not that close, and not that fast.

We seek connection because we are created for connection. Yet when the connections get complicated or distraught, we find ourselves up close with the hard stuff in startling ways we don’t feel prepared for. We may “glove up” in case there is something oozing that we shouldn’t touch—protecting ourselves from the woundedness the world bears. In the end, we may do what we know we need to do and carry on, but we also harbor pains, both small and large, of knowing that something that was meant to be beautiful is no more.

I can’t control the God-given instinct of birds to skitter off if I approach a window too quickly. Yet having witnessed this one beautiful robin’s demise, now as I still myself to watch the birds and listen to their calls, I hope I will also remind myself to still enough to watch and listen to the humans in my life, no matter how close and fast and terrible their stories.