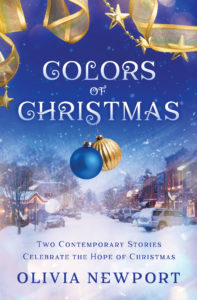 Goodness, when I turned in the manuscript for Colors of Christmas back in February, an October 1 release day felt so far off!

Yet here we are. October 1. Advance copies have been out in the world for a couple of weeks, but this was the target day in my calendar and it nearly slipped by me. Can you believe it?

This book has two Christmas novellas, “Christmas in Gold” and “Christmas in Blue.” The first one is rooted in the story of a real person, Astrid, an older woman I met at the gym. I first heard her story at a Culvers restaurant and scribbled notes on a pile of brown napkins. Despite tragedies and setbacks, she is one of the most faith-filled and hope-filled people you could ever meet. It brought me joy to bring her story to life in “Christmas in Gold,” with fictional framing. A few days ago I took copies to people at the gym who know the real Astrid and are eager to learn more of her story through my book.

“Christmas in Blue” was inspired by “blue Christmas,” an observance on the longest day of the year that recognizes that Christmas is not easy for every one, especially for people who have known loss in the preceding year. A man at the gym, who took one of my books because of Astrid’s story, said he just wants to get through Christmas and get it over with. I was able to tell him that “Christmas in Blue” was written for people who feel that way. I hope when he reads it, he’ll find new hope in the season.

Celebrate with me as this new book baby officially makes its entrance into the world on its book baby birthday! (Here’s a link with some handy buy buttons if you like to buy books online.)