Empty Shelves and Clearing Up 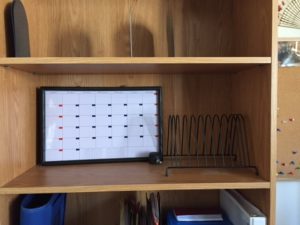 These two shelves in my office are rarely in the state in which you see them here—empty. They’re usually filled with research and notes related to whatever writing projects are in progress at any given time. Seriously, I think for the last five years, since the release of my first book, The Pursuit of Lucy Banning, the next projects have come pretty steadily.

Thank you, because so many of you reading have kept the projects going.

Last summer and fall brought some persistent health issues, and while I moved forward with the projects that lived on these shelves at the time and got those manuscripts turned in (more on that below), I’ve definitely slowed down. I didn’t quite have the creative energy to also be dreaming of what would live on the shelves next.

I still don’t know. But I’m dreaming. I have some ideas, and I’m excited about what they might turn into.

But I’ve needed the time and space. To be tired. To heal. To let myself feel creative in other ways than smashing words around.

I’ve actually cleared out more of my office than just two shelves. I had gotten to the point that I was running out of places to put stuff and I didn’t even really like being in there. Part of healing and clearing my head and restoring creativity has been cleaning. Deep cleaning. Sifting through ten years in that office.

I have discovered that one off the issues that increasingly makes it hard for me to focus is too much distraction in my field of vision. Not clutter, exactly. Not junk. (Thought I did get rid of a lot of stuff.) I used to sew a lot until things got to the point that a) I didn’t have time and b) my sewing machine acted up so much it wasn’t fun.

After leaving it in my closet for three years, I finally bought a new one. I recovered my dining room chairs. Then I decided that maybe I’d like my office more if the immediate field of vision didn’t distract and distress me.

So I did this. Time for another picture. 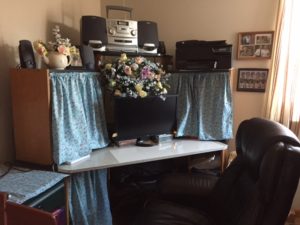 It’s only been a couple of weeks, but so far I like it. And I am working on filling those empty shelves. (Too early to spill the beans yet.)

There is also the matter of adding some joy to the room. For Christmas my son gave me several print of the official photos of my Cubbies winning the World Series. They are now up in my office as well. Go Cubs! 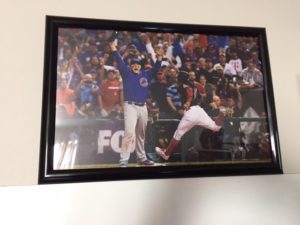 In the meantime, in just three months Gladden the Heart comes out. This is another in the Amish Turns of Time series of Amish historical books, this time set in 1847. When the lively fervor of nineteenth century revivalism endangers the staid customs of the Amish community in the lush but rugged Kishacoquillas Valley of central Pennsylvania in 1847, the Amish church must deal with a divisive question: What is a genuine spiritual experience?

And in the fall, Colors of Christmas will come out, with two stories in one volume. But we’ll have plenty of time to talk about that as time gets closer.