Once Upon a Table 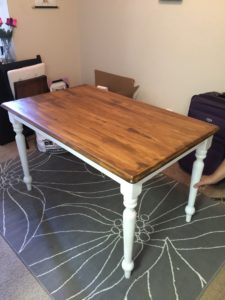 Once upon a time, I bought a table and chairs. I’d been married four years and had already moved three times. In each place, we used a different hand-me-down free table and some hand-me-down wooden folding chairs. Now we thought we were some place where we would be for awhile, and in the spirit of offering more satisfactory hospitality—for us and our guests—we took the plunge, went to Sears, and bought a table and four chairs. We figured we could continue to use the four wooden folding chairs as well. Having seats for eight, rather than four, felt luxurious. This was supposed to be temporary, while we saved up some money to add to the set.

Instead we dragged those four new chairs and four little old ones around to multiple more moves. About two children and fifteen years later, the Sears chairs were giving out. (Guess which family members sat in the chairs that took the worst beating. Hint: they wiggled a lot, sat in odd positions, pressed back with little elbows, and jumped around.)

Now, these chairs were cane-backed chairs, and it was the caning that gave out. We discovered pretty fast that yes, they can be recaned, and yes, it is pricey. We did one. When the second one gave out, the caning crumbling and pulling away from the edges, I grumbled and sat in it myself so it wouldn’t get any worse. And so a child would not fall through. Of course that exposed a third chair to certain risks. Soon we were down to one original chair and one recaned chair. (And still four people.)

At that point I decided it was more economical to just buy all new chairs. They wouldn’t match the table exactly, but at least no one would be falling through the backs, and if I chose something modest I could get six.

I found chairs. Then I decided I wanted the table that matched because it suited the space better. (And matched!) The original table, now about twenty years old, was dismantled and stored. We only had space for one table.

Then I started working at home. With no office. One thing led to another, and we put on an addition that gave us two rooms—an office and a dining room. So out came the old table, a perfect size and shape for the new space.

Did I mention the lack of chairs? Out came the old wooden folding chairs. I was sentimentally attached to them by now. They had been my mother’s decades ago, and she was well along in years. A fresh coat of paint, and bam, ready to go. Then one day I was out walking the neighborhood and passed a yard sale. Four cane-backed chairs called my name, only $4.00 each. They weren’t an exact match to my set, but they were close enough, meaning the height was right and they were adequately caned and they were not an absolute different color. The seat covers weren’t terrible, but that was an easy fix. I went home, got my minivan, and finally had six (sort-of-matching) chairs to go with that table. It only took 30 years.

Why am I thinking about this?

Because of my daughter.

She moved into an apartment a couple of years ago and wanted a table and chairs. We found a butcher block table at the Salvation Army store, and she gladly painted both the table and—you guessed it—the four wooden folding chairs that I was no longer using now that I had two tables, each with six chairs.

My daughter is a teacher and loves her summers off. She also loves to think of projects to do in my garage. She had tired of the paint color but not the sturdy table, so last week she stripped off the paint and rubbed on a lovely dark stain. She painted the legs white, and now she is on the hunt for some bargain chairs that are more substantial than the folding chairs, and she will also paint them white. The vision is crystal clear.

And it will be beautiful.

Since she and her husband of one month have very little storage, I suspect that once she finds her bargain dream chairs, the painted folding chairs will make their way back to my house. At least until someday when she lives in a bigger space and has use for them again, perhaps as the guest chairs they once were for me.

So the chairs have served three generations, gathered around various tables representing various phases of life for various people.

When I look at my daughter’s, though, I see the future once again cycling around in the eyes of the young.