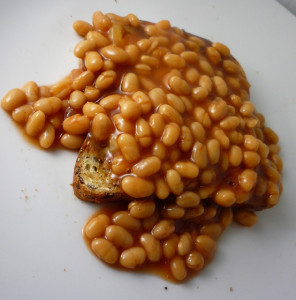 My mother was born in 1926—she recently turned 90—and was one of nine children in the family growing up in a small town in rural Arkansas. Her father lost his business in the Great Depression. Soon after that, while the family’s belongings were stored above another business, that building burned and they lost everything. It’s easy to imagine how difficult things were for the family during the 1930s.

My mother tells stories of the family’s dependence on charity—bags of beans or rice, for instance. Sometimes this was all they had, and servings were rationed to keep everyone fed until the next bag might appear.

One of my mother’s most vivid memories is one day finding herself alone in the kitchen with a pot of beans bubbling on the stove. She looked around to be sure, found an empty can, filled it with beans, grabbed a spoon and went outside behind the house where no one would see her.

And she ate those beans, savoring each one as she swallowed it.

“That was the best meal I ever had,” she has said on more than one occasion.

And I never know quite what to say, because it makes me feel sad. She must have been hungry that day. She must have known hunger well, even. She must have had many meals when she left the table without enough food to satisfy her stomach. She must have felt insecurity about whether there would be food on the table the next day. Why else would she remember a stolen serving of beans as the best meal ever?

My mother doesn’t tell a lot of stories of growing up in the Depression. I’m as a child she had no other reference point of what life should be like. She went to school. She went to church. She visited her grandparents. And on that one day she ate her fill of beans she didn’t have to share with anyone.

Knowing this story is one of the things that has made me interested in what it was like for ordinary people to live through the Depression. From our history classes, we know the facts of the stock market collapse and drought and raging unemployment and “hobos” who rode the rails. But beyond the statistics, real people lived through real financial disaster as the country as a whole tried to climb out of the unthinkable.

A longtime interest in writing a Depression-era story finally came to fruition in Hope in the Land, a story about how both Amish and non-Amish farms struggled to weather the difficult years. A few days ago I received my author copies, which means books will hit the bookstore shelves soon. The official release date is April 1—just around the corner.

I hope you’ll enjoy this latest addition to the Amish Turns of Time series.