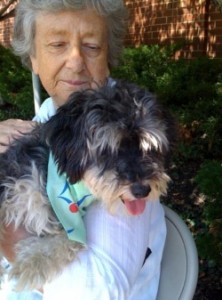 I’m not turning 90. But my mother is, in just a few days. She’s always been a little proud to share a birthday with Thomas Edison.

My dad died when he was 83, and both of my in-laws were gone by their mid-80s as well. So it feels like a big deal to have our one remaining parent turning 90. I’ll soon be off to Chicagoland for the family shindig to mark the occasion.

When I began blogging, I included a feature called Mama Says. My siblings and I used to say “Mama says” to each other all the time, because of course “Mama says” was the ultimate authority to resolve any childhood disputes. If Mama has ruled, who can argue further? We may have huffed and stomped, but we all knew the squabble was over. (For the moment, at least.)

Though I haven’t added to Mama Says in a long time, you can still see some of the hilarious and helpful things she says during our daily phone calls right here. Enjoy them as a way of partying with me as I am grateful for my mother’s long life and wise influence.