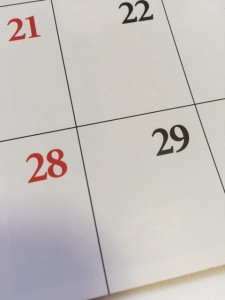 Does February 29 somehow feel like an extra day? Like a surprise to see it on the calendar? (Probably not for people born on February 29!)

It’s all a mathematical glitch, of course. Like when I can’t quite figure out where my math went wrong in my check register. It’s close, but not quite there, so I just write “adjust” and start fresh with the balance the bank gives me. Every four years we need that extra day to keep the calendar math straight.

In the early Roman world the calendar had only ten months. Later, two months were added to keep the seasons straight, but the number of days in a year still didn’t match the time it takes the earth to go around the sun, so the seasons still fell out of sync, just at a slower pace.

In 46 BC Julius Caesar tried to fix the math. But it still wasn’t quite right. In the sixteenth century Pope Gregory XIII fixed the math again, giving us the Gregorian calendar we use now. But not everyone started using that calendar. Protestants were hesitant to adopt a “Catholic” calendar. And all through the centuries cultures bounced between the traditional start of a new year in March, with spring planting, and the new calendar new year in January.

So you can see it was a muddle all around.

When England finally adopted the Gregorian calendar in 1752, so did the Colonies. But this required skipping 11 days to catch up and get in sync with parts of the world that had already been using the Gregorian system. Benjamin Franklin quipped, “It is pleasant for an old man to be able to go to bed on September 2, and not have to get up until September 14.”

Sometimes it’s tempting to skip whole days—if I could wake up and find all the tasks that fill those days had somehow completed themselves! That doesn’t seem likely, so I guess this year I’ll just be extra grateful for the twenty-ninth day of February that gives me a little more time before those March 1 deadlines!