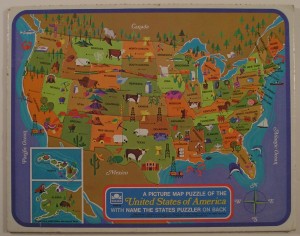 My son was an unusual preschooler. He was obsessed with all things geography, particularly a large floor puzzle of the United States that he assembled countless times. He kept a school room size map of the U.S. on one wall of his room and a map of the world on another.

When he was six and visited me at work, he picked out the capital of Bulgaria on a colleague’s wall map of Eastern Europe–a map that did not have any country boundaries marked and was not labeled in English. He could also identify the countries in Africa by their shapes alone, and he put me to shame in the annual National Geographic quiz that appeared in the Chicago Tribune. “Where in the World Is Carmen San Diego?” was a favorite television show and computer game, and he often figured out the clues before I did.

Eventually he moved on to other interests. He’s a grown man now, and these days his recreational habits turn to NASCAR, lacrosse and hockey. He rolls his eyes when I tell stories of his early geography craze.

So I found it incredibly heartwarming when he recently discovered a History Channel show called “How the States Got Their Shapes” available on Netflix and was quickly enthused.

He’s watched all the available episodes, and now we’re watching them together as I have time. And I got a friend from the U.K. who dreams of a road trip across the U.S. hooked as well.

I thought the geography days were gone for good. It’s been fun to see that bent resurface twenty years later. My little boy is still in there somewhere.

• How about you? If you have kids, how have you seen their childhood interests manifest in their adult lives?