Glad I’m Not Her 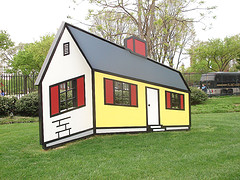 A couple of weeks ago, my daughter asked me to go with her to look at a rental house. She’s in an apartment now, and she and her roommate feel like they’re ready for more space and a fenced yard for the dog when their lease is up. I went happily.

When we arrived, we hesitated briefly outside, wondering if the management agent had arrived yet. A couple pulled up and marched past us.

The wife said, “Is the management company here yet?”

I said, “We were just wondering that.”

Right then the front door opened and some people exited, and we realized the agent was indeed there and had already begun showings.

We were barely inside when the husband asked the agent if she had any applications yet.

Then he said, “What if I write you a check for a year right now?”

I admit I had an impulse to let him know what I thought about the idea that he could throw his money around and jump to the front of the line. You’ll be proud of me. For my daughter’s sake, I didn’t. She might still decide to apply for the place, and applications would be evaluated in the order submitted. The first one to qualify would get the house, not the guy with the most money. I was glad to see the agent stick to the rules published for the process.

My daughter and I looked around. When we returned to the kitchen the agent was talking with the power  couple. Pen poised over paper, she said, “If you want to tell me what you’re looking for, I’d be happy to keep an eye open. We get new listings every day.”

The wife began, “Well, what I’d really like is—”

His wife had clamped her mouth closed at the first word he uttered.

Okay, I admit, again I had an impulse to let him know how I felt about the way he was treating his own wife. She knows what she wants. Let her talk.

My daughter had questions as well, so we lurked nearby and couldn’t help overhearing. He kept it up, interrupting both women to take control of the conversation.

And I was so glad not to be that wife, married to that man. Or to be working with him.

I guess seeing how the people close to you could be treating you is one way to be grateful that they don’t do that. As steamed as I was, I tried to take a positive lesson from the situation.

How do I make people feel? Do I interrupt? Do I think I can tell them what they think better than they can express their own thoughts? Do I act as if I should be able to go to the front of the line or play by different rules because I have more of something?