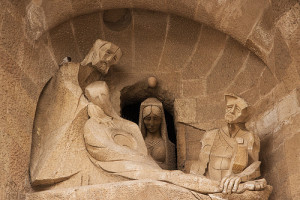 There was a time when I could not imagine Holy Week without going to church on Good Friday. In those days, though, I didn’t know the term Holy Week, and the churches I attended were likely to have either a Maundy Thursday service or a Good Friday service. Asking people to come to both seemed like a bit much.

Eventually, though, I ended up in a church that saw these two days as distinct. After all, completely different events happened to Jesus on Thursday and Friday before the resurrection. And I began to grasp the concept of an entire week between Palm Sunday and Easter that was full of holy days.

And then I discovered the tradition of the Great Vigil of Easter—a service that happens on Saturday night as we await the resurrection. The purists will hold a vigil beginning at 11:00 that ends after Easter Sunday morning has begun, though many churches also hold the service earlier in the evening. I learned the word triduum, three days that begin with Maundy Thursday and end with the Great Vigil.

I know not everyone can manage going to church three nights in a row–plus Eastern morning for some–but I am in a season of life when most years this is possible for me. Triduum is a profound spiritual practice for me.

All Christians hold the death and resurrection of Jesus at the center of faith. “This is the mystery of faith,” we say during communion in many traditions. “Christ has died. Christ has risen. Christ will come again.” Holy Week, particularly the days of Triddum, invite me to step into the final days of Christ’s incarnate life, and for me Easter is all the richer for having done so.

Entering Christ’s story has also become a time to reflect on how Christ enters my story. Two years ago, this happened in a way I don’t imagine I will easily forget. My brother died on March 17, a few days later my mother collapsed, and I spent Holy Week bodily involved in this suffering. Easter Sunday morning found me on an airplane with my heartbroken mother on our way to my brother’s funeral. Another brother preached the funeral sermon, using the story of Lazarus, and as we heard his sister’s anguished cry, “Lord, if you had been here my brother would not have died,” we could all identify with particular poignancy.

Last year I stumbled through Lent and Holy Week, unable to set aside the memories of the year before and fully enter my usual spiritual experience of Christ’s sacrificial love without feeling fresh pain in my own loss. I wanted Lent—even Easter—to be over so I could stop feeling that way.

This year I realized that even though the dates of Lent and Easter change every year, the anniversary of my brother’s death will always fall during Lent, and I will always have spent an Easter Sunday morning flying to his funeral. But rather than trying to hold my own suffering separate from Christ’s, I am more able to linger where they meet and welcome both solace and calling in the intersection.

Here we are in Holy Week again. Whatever your traditions in these final days before Easter, whatever suffering grieves your heart, may you find Jesus there.