Why I Returned to the Wild 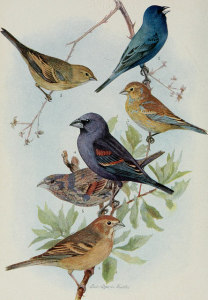 Over the last few weeks I’ve heard various comments from friends, in person or in social media, about how they are put their yards to bed for the winter. They say that like everybody does it.

Well, I’m here to say today that my yard has not had a bedtime for the last couple of years. Maybe three? (Beyond that, I’m not admitting.)

In fact, my yard has pretty much done whatever it pleases during this time. I did pull weeds three times this summer, but that was sort of like chasing after a giggling buck naked toddler when you have a broken ankle. Pointless when weighed against reality.

It is true that I don’t particularly get my jollies from yard work. On the other hand, I don’t mind the opportunity to listen to an audiobook while I work. The main thing is that the last couple of years have been chock full of writing deadlines. That’s a good problem, so I don’t complain, even if I do feel the burn of an inner grown whenever I look out the windows on the back of my house.

My back yard is on a hill and has tiered landscaping. At first I thought I would just let the top level go wild. I didn’t spend time up there anyway. In August the sunflowers take over and it’s marvelous just the way it is.

Then I relinquished the next layer down. After all, attempts to construct a functioning watering system for flowers have failed. Then I let go of the next layer down, leaving me only with the patio kind of space right outside the back door. This I can water and weed with reasonable cost in energy and time.

But I’ve noticed something unexpected after a few summers of not trying to keep everything in order. Bird life like I never saw in previous years.

It’s a little frustrating that I don’t know much about birds. Years ago I got a bird book for Christmas. It has great pictures, so sometimes I go running for it but I never get there fast enough. And I never get close enough with a camera to snap a shot and look it up later.

So most of the time I don’t know what I’m looking at, beyond the magpies, crows, doves and robins I’m used to seeing around the neighborhood.

And I’ve decided to be okay with that. When I see a bird that makes me want to stand still, hold my breath and stare, it’s a good reminder of the hidden beauty in all our days. When a bird lifts off and I glimpse the white or orange tucked under the spread of its brown-speckled wings in flight, it reminds me that each day has its own surprises.