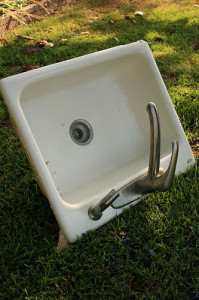 Down came the dropped ceiling, with the ranks of fluorescent lights and plastic ceiling panels that made my kitchen look like a church basement from the 1970s.

I’ve lived in this house for eighteen years. At first I thought the brightness of the kitchen was a good thing. And it was. The space doesn’t have much natural light, so the fluorescents did their job.

Then there were the almond appliances. I’m so over them. And since we replaced the dying stove last year with a stainless one, the appliances were officially mismatched.

And the cabinets, oh, the cabinets. One set original to the house. Another set added later by the previous owners with no effort to match the first set. Both sets were pretty banged up and had some broken hinges. And the old laminate counters were dinged up, the once-fancy oak trim now worn and unimpressive.

More and more, every time I walked into my kitchen, bile rose from my gut a little at a time. This summer I decided this was the year to do something. I thought if I could do one thing, I would reface the cabinets—and of course the lights. (Okay, that’s two.)

So I fixed in my mind what I thought we could spend, and we had a couple of companies come in to give estimates on cabinets and counters. Reality slapped me hard in the face. I had let excitement about a new kitchen get ahead of me. The truth was I could afford to do something about my kitchen, but not everything. Not by a long shot.

A moment of truth is a good time to take a deep breath, exhale the impossible, and refill with gratitude for what is and what may be.

The experience of remodeling the kitchen gave me reason to consider the boundaries around my state of contentment. Why was I letting outside forces make me believe that more is better?

Sometimes we need to not be content with the status quo—in the face of injustice or conflict, for instance. If we can do something to alleviate another’s suffering, we should not be content to let it continue.

But other times, like whether my kitchen is as fancy as your kitchen—never mind the ones on HGTV—we gain more by appreciating the beauty of contentment and gratitude. How much richer our lives would be if we saw our circumstances through these twin lenses.

We have a modest home. We did a modest remodel. No demolition. No debt. More is not always better. Enough is better. Contentment is recognizing the satisfaction of enough and being grateful. That’s what I want to feel when I walk into my kitchen.

P.S. For those who are curious, we ended up with recessed can lighting, granite overlay counters, and a new microwave and fridge, which was largely a proactive measure to replace them before they died anyway. Then we slogged through the work of sanding and painting the cabinets, hunted down shiny new hinges that would work on our ancient cabinet doors, and updated the pulls so everything matched.