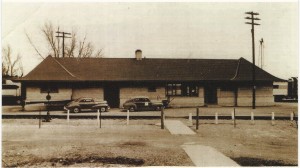 Eighteen years ago I moved from Illinois to Colorado. For a long time, a couple of times a year we drove back and forth for family visits—usually spring break and Thanksgiving. My kids loved seeing the cousins, and they became quite accomplished car travelers. They knew where all the good truck stops were.

Usually we left after school and drove as far as North Platte, Nebraska, before stopping for the night. Our first break was in Limon, Colorado, for a fast food supper.

And that’s pretty much what I knew about Limon.

When I became interested in Amish history, I discovered that 100 years ago there was an Amish settlement just west of Limon. That was a shock! And a curiosity. Learning about the circumstances of the settlement led me to write Wonderful Lonesome, which just released.

While researching, I discovered that the old train depot had been restored to the way it looked at the time of my story set in 1914. And it was a museum. This called for a field trip! Off I went, husband in tow.

I expected to just poke around a small local museum and come away with some visual impressions for my writing. Instead, I met an enthusiastic woman receiving visitors to the museum and ready to talk a blue streak. It turned out that for decades she had been collecting stories and information about the families who lived in and around Limon.

I mentioned names of some Amish families who had been part of the 1914 settlement. The museum docent recognized several surnames. She led me into a tiny office and opened a file drawer to pull out folders of stories.

It was quite something. I knew I was working with real names in my research, and I knew that some of the settlers had left the Amish church and joined the Mennonites. These were the names whose descendents left a legacy in the small town of Limon.

My people, as I had come to think of them.

One of the Amish men who became Mennonite had been a leader the local school, and a hundred years later there were still bits of information circulating about him. I stood at a map with the docent, and she showed me where the farms of my Amish characters would have been, to the west toward Colorado Springs. I’d read that Pikes Peak was visible from their farms, and she verified that was certainly true.

My inspirational field trip turned out to be one of the best research outings I’ve ever had.

• Have you ever taken a short trip that paid big rewards? What was it like?