Answer the Door. Meet the Day. 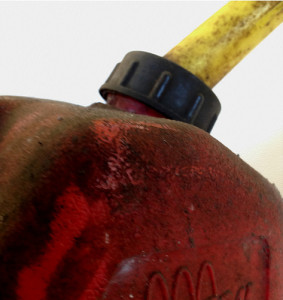 A few days ago, I had just poured my morning coffee when the doorbell rang. My  neighbor would have called if she was coming over. My daughter would have rung the bell at least six times quickly to let me know it was her. It was too early even for the FedEx guy.

So I answered the door.

A woman, whose first words were, “I’m terribly embarrassed,” explained that she had run out of gas. She pointed to her van across the street and asked if she could use a phone.

I briefly wondered who drives around without a cell phone these days, but keeping my judgments to myself I invited her in and handed her the phone.

“Do you have someone who would come help you?” I said.

“We’ll see,” she said. “We’re sort of separated and he’s on the other side of town.”

I stepped away as she dialed, but it was hard not to hear her side of the conversation. It didn’t sound as if her husband was too interested in coming to her rescue.

She looked up at me and said, “Do you have a gas can?”

It had been years since we needed a gas can, but I went out back to look for it and carried it into the kitchen.

She told her husband she’d be all right and put the phone down. We walked out to her van.

“It’s lucky for me you have gas in the can,” she said, opening her tank.

“That’s just something my husband would do.” I couldn’t really take credit. I tipped the nozzle into her tank.

“Are you still married?” she said.

I listened to the gas gurgling into the tank. “A lot of forgiveness, I guess.”

I glanced up and shifted the weight of the gas can, trying to keep the mud on the bottom of it off my clothes. I didn’t know what to say.

She said he picked at everything she did, every expression that crossed her face. They went to Orlando and never even went into Disneyworld. Instead, they spent the whole time in the hotel fighting. She still had her unused ticket.

The gas can was as empty as it was going to get. I pulled it away from the van.

I was so surprised that a perfect stranger was telling me so much about hers, and I was sad that she apparently didn’t have someone who knew her and loved her in whom she could confide.

She jumped behind the wheel and turned the key. The van started. She thanked me and drove off.

I hope that mine was not the only kindness she experienced that day.