The Opening Pages of The Invention of Sarah Cummings 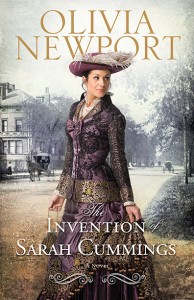 The hat crooked its finger at Sarah Cummings.

The gesture was sophisticated. Seductive. Irresistible.

Sarah pushed open the shop’s door for a better look from the inside of the display window. Under a flood of sunlight, the gold bead trim adorning a narrow crimson brim doubled as a prism, sending hues to chase and dance around the milliner’s shop.

She did love that hat.

The classic oval shape of the crown and simplicity of design would make it versatile—worth every penny of the price. The coins in Sarah’s purse were a long way from sufficient, though. She had not yet attempted to make a hat herself, but having mastered gowns and suits, she contemplated her next frontier unafraid. A hat would require such a small swatch of fabric. The attraction was all in the design and the trims, and she had a small trunk full of ribbons, beads, and buttons harvested from gowns over the last three years.

Considering the afternoon she had just experienced, Sarah felt she deserved an indulgence.

“Don’t you just adore that hat?”

Sarah turned toward the voice. The eyes fastened on her were speckled—she was unsure what color to call them. Not quite blue. Not quite hazel. Certainly not green. But bright. And not tired at all. She had seen those eyes before. The not-quite-any color was uncommon enough to be memorable. But they did not belong to anyone on Prairie Avenue that Sarah could remember.

“I’ve been marveling at that hat through the window for two weeks,” the young woman confided. “Even my mother agrees it’s exquisite, and we rarely agree about any matter of fashion. You should have seen us choosing gowns for a wedding we attended.”

And then Sarah knew. Florence Pullman’s wedding at the end of April. The immense parlor of the George Pullman home had been decked in green and gold, with vast wreaths of orchids and lilies of the valley cascading down the pillars. Florence had taken her vows in the bay window, wearing an opulent ivory satin gown. Sarah remembered the train cut on the bias. Mrs. Pullman had asked Flora Banning for the loan of her maids, including Sarah, to serve at the reception that lasted until midnight. More than two hundred people had been there for the gala and eaten from the five-tiered cake with the angel on top.

Including the owner of this pair of indescribable eyes. The voice rang familiar to Sarah now as well. She had heard this young woman’s laugh as she offered her the tray of finger foods and Johnny Hand’s orchestra played behind the screen of palms. Sarah smiled weakly and glanced back at the hat. Across the shop, a clerk perked up at the prospect of business. Sarah estimated the steps that would take her back to the sidewalk, out of range before the young woman with the laugh and eyes began to remember as well.

THE INVENTION OF SARAH CUMMINGS releases September 15, 2013 from Revell Books and is available in all the places you like to buy books.