Confessions of a Mac Lover 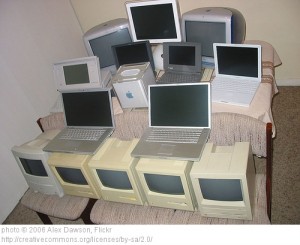 First, in the interest of full disclosure, let me confess I am a Mac aficionado.

In the mid- to late 80s, I was on a break from working in an office. I worked in a retail setting, began to think seriously about writing, and had a couple of kids. In 1992, I reentered the corporate world, where they sat me in front of an Apple computer and said, “Go.” Fortunately, because it was an Apple, figuring it out was pretty easy. When I bought a computer to use at home, I bought an Apple. I could pack up the monitor and keyboard in a padded case the size of a thick sleeping bag and sling it over my shoulder to heft anywhere there was an outlet. Cool!

At our house now, we have four MacBook Pros, four iPhones, an iPad, and three or four iPods kicking around.

Many years after first sitting in front of a computer, I worked for seven months in an office that used PCs. I spent the whole time wondering why people preferred to do things the hard way when they could be on a Mac. People would mutter about the cost of a Mac compared to a PC, and I always felt that the savings in aggravation was well worth any initial price difference. Over the years I have seen friends cautiously and perhaps reluctantly try a Mac at work and then start looking for reasons to throw their old PCs at home out a window so they could have a Mac there too.

I know, I know. Some of you are Mac lovers and are thinking, Preach it, sister! More of you are rolling your eyes and thinking Mac people think they are so superior.

Arguments aside, I knew Steve Jobs was a co-genius behind Apple, though of course he had a team when he started out. I enjoyed his products, but I never particularly followed the details of his life and career. Last week my son invited me to go see the movie Jobs together, so I went.

It was fun seeing recreation (or resurrection) of early Macs. Apple as a “they” dissolved into names and faces and contributions and incredible risks.

These products that make our lives smoother in ways we couldn’t imagine twenty years ago came at a price. Steve Jobs was not much of a people person. He treated people badly, even those closest to him, even denying a child. While I was vaguely aware of this before, the movie makes it plain in a juxtaposition of genius and ruthlessness.

Jobs is not the only great innovator about whom such a story could be told. I remember decades ago reading a biography of Bob Pierce, the founder of World Vision. I was working for the international ministry at the time, and his daughter had written the book after his death. Bob Pierce traveled internationally ten or eleven months out of every year. While he was saving children around the world from poverty and building a worldwide organization that still thrives in its mission, his own children grew up fatherless and wounded and confused.

Where is the line? Is it possible to innovate and change even a small corner of the world without inflicting harm on others?

It’s hard for me to imagine World Vision not giving millions of children hope for a future, or not having Apple products in my home for the last twenty years.

But something inside me winces nevertheless at the conflagration of beauty and pain.