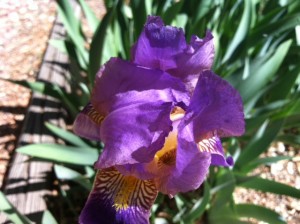 Most years I have a love-hate relationship with my yard.

A couple of weeks ago a friend dropped by my house to pick up something. We stood in my front yard chatting. She noticed some things that were growing well, and I countered by pointing out one flower bed that was empty—despite the fact that I had planted perennials in it every year for the last several years.

The last thing that lived in that space was an ugly hedge. Which was dying from the inside out. Which was why we looped it to the back of a neighbor’s truck and yanked it out. Ever since then, I’ve had visions of a colorful abundant flower bed flourishing beneath my front window. Everybody else in the neighborhood seems to be able to grow cosmos, for instances. Why shouldn’t I?

So far it hasn’t happened, though I have tried.

As I chatted with my friend, I also observed that my irises were not looking especially promising either. Usually at this time of year, they are in full bloom and I have a total head rush of their beauty. This year, they looked to me to be defeated by a late frost and spring winds.

The next weekend I bought some plants, soil enrichments, and mulch and made yet another effort in that front flowerbed. As I dug up the ground and set the plants in, I wondered why we care so much whether things grow. Here’s what I came up with.

2. Growing things remind us life goes on even after a winter of the soul.

5. Growing things connect us to the gift of creation, and that connects us to God.

So far my new plants look like they will survive the transplant, and I’ve seen two buds among the irises, so I have reason to believe they will bloom after all.

And I’m going to plant my heart in hope that I will have blooms under my front window and faith that new life with sprout once again in my ordinary days.

• What is one way that nature’s beauty speaks to you?