To Series or Not to Series 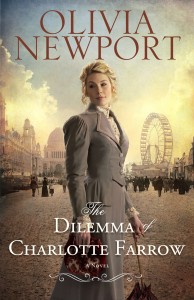 The Dilemma of Charlotte Farrow is the middle child in the Avenue of Dreams series.

Do you read past book 1?

In the last year, I’ve had the privilege of rolling out the start of two different series, Avenue of Dreams and Valley of Choice. Ten months from now, both series will be complete.

Out there. Out of my hands. Up to the readers to judge.

The two series don’t have much in common except I wanted to write them. One has a wealthy, urban 1890s setting, and the other is largely contemporary Amish.

Now I’m working on a couple of new proposals. For series. Lately I find myself wondering what it is about doing a series that appeals to me.

Well, a multi-book contract is an obvious answer. But I can think of a few other attractions.

• Practicality. I can create a setting and a cast of characters and get a lot of mileage out of the research effort.

• Fun. I get attached to my own characters, so it’s fun to keep writing about them.

• Simmering. I know what I’m going to be writing next, so a story can simmer in the back of my mind for months and feel more mature when it’s actually time to click the keys.

But there are drawbacks to doing a series as well.

• Bigger risk. Even if a first book does well with readers, that doesn’t mean the series will. Some will feel satisfied with one story and not feel the urge to dip in the same well again.

• Disappointment. Readers who did not care for the first book won’t pick up book 2 or 3, and I may never get another chance to share one of my stories with them.

• Boxed in. I always have more ideas than time to write about them. Single titles might give me more flexibility in what to write about.

• Do you like to revisit a setting and characters by following a series, or do you prefer to see what new stories a writer might have?