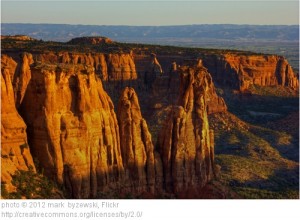 A few days ago was my grandfather’s birthday. He would have been 124. He died 34 years shy of that mark, which means he still lived to a ripe old age.

My mother grew up in Arkansas, and her family had been in Arkansas for at least a couple of generations before her. But her father, my grandfather, was born in Colorado, the state where I live now. The family’s sojourn there was brief, only a few years, but long enough for my grandfather and a couple of siblings to enter the world in a state they would be too young to remember when their parents packed up and moved back to Arkansas.

Family lore gives reasons like capturing wild horses or sugar farming as the reason this young couple decided to give life in wild Colorado a try. Apparently things did not work out so well. Family lore also says that they returned to Arkansas by covered wagon despite the web of railroads that criss-crossed the nation by that time.

About fifteen years ago my parents visited us and we all went on an adventure to find the small town in western Colorado where my grandfather was born and another where twin siblings were born. The town is still there, and it’s still small, but it was sort of fun to walk down the main street and realize which buildings were in existence when my grandfather was born. My favorite was a tiny jail cell.

We found a small local historical museum where a woman was enthusiastic to help us find any family records. We were unsuccessful. I’m not sure my grandfather had a birth certificate, for instance, and as near as we could calculate none of the children were ever old enough to be enrolled in school there. So two possible avenues of exploring records led nowhere.

My strongest memory is my mother’s delight at visiting this place where her father had been as a child. A few years later I had reason to be back in that area and once again soaked up an inexplicable mysterious connection in time and place. The nearest community of any size is Grand Junction, as I’m sure it was in 1899. Geography has not changed much, and significant areas have been preserved in the Colorado National Monument and national forests.

When I witness the vistas of the region, I can’t help wondering if the blue eyes of a small red-headed boy saw these same views, even if he would never remember them. I like to think so.