4 Things I Learned from My Ancestors 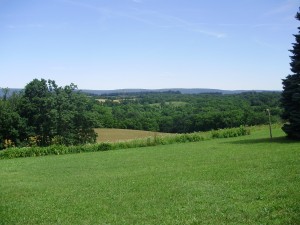 This is a present-day photo of the land in Pennsylvania that my Amish ancestors would have known.

My eldest brother is a person of note in a Christian denomination that is … well, not Amish. I remember the first time I told him that I had discovered a link to early Amish settlers in our own family history. His head just about hit the table.

In the Valley of Choice series, which began with Accidentally Amish, I’ve had some fun writing about these ancestors. I know a few facts for sure. The rest I imagine to life. Here are a few things I’ve learned, whether from the fact or fiction side of things.

1. Conviction. Whether or not my brother and I would agree with some of the religious decisions our ancestors made, I have no doubt that they acted out of conviction. They knew why they were doing what they were doing and fully believed it was right. That’s a worthwhile trait to cultivate.

2. Risk. My ancestors did not have easy lives. The environment was harsh. Their religious choices set them apart. Hostilities between white settlers and Native Americans were a constant threat. War loomed. Yet they accepted risk as the flipside of hope and did the next thing they believed needed doing.

3. Perseverance. Whenever I read and research and ponder the stories of people settling the New World, I admire the overall spirit of perseverance that allowed them to carve out their lives. I always ask myself if I would have been a quitter. Take the next boat back to Europe. Never go further west than Boston. I don’t know.

4. Innovation. We expect speed convenience these days. If a website doesn’t load within three seconds, we’re on to something else. I don’t suppose there was not much that was convenient about life in the 1730s in Pennsylvania, but I’m sure there had to have been innovation and problem solving going on. There just had to be.

Does it matter that I never met Jakob Beyeler and his ten children and their many, many children and grandchildren? Seems to me I learned a lot from them without ever seeing their faces.