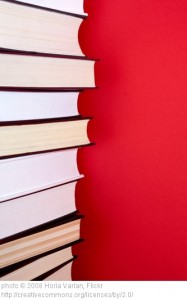 On the evening of the first Monday of every month, you will find me with some of the most stupendous people I could ever hope to meet.

And we actually read the books. Granted, not everybody reads every book. Life happens. But we’re not one of those groups that calls themselves a book group but really is there for the food. (Although we do have food.)

Because December can be outrageously busy, we remember to be people of grace–toward ourselves. We don’t read a book that month. Instead, when we gather in January, it’s a free-for-all to talk about all the books we have been reading during the year outside of book group. Based on the number of books I read in a year, and the number of people in my group (all voracious readers), I’d estimate the total number of books we read to be in the 500–600 range.

2011 was the first year I kept a written list of all the books I read, month by month. So I was ready for our discussion in January of 2012! I put little stickies over my book titles and gave out awards.

Most heartstopping. Most beach read. Most confusing. Most quirky. Most impossible to finish. Most been meaning to read for a long time. Most bleh. Most wish there were a sequel.

You get the drift.

Tonight I get to have this conversation again about the books I read in 2012. Everybody is supposed to have their awards categories ready.

• How about you? What awards would you give out for the books you read in 2012? Give us the category and the title.