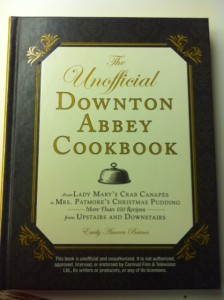 Perhaps kindred souls flock together, but practically everyone I know is watching “Downton Abbey,” a period masterpiece from BBC broadcast in the US on PBS’s famous Masterpiece Theater.

I do have a few friends who haven’t been bitten by the bug. Yet. And a bunch more who have been cramming Season 1 and Season 2 so they can catch up with the current Season 3.

A friend put me onto it at the beginning of Season 2, only about 16 months ago. I found Season 1 on the PBS website and did some cramming myself. Then when Season 1 reruns were on PBS before the new episode every week (just like they’re doing this season). I sat transfixed.

My husband would wander through the family room, pausing for a few minutes to see what had persuaded me I did not have time to cook dinner. Then he started sitting. Then he started announcing, “Downton Abbey is on.” Then he was sending me clips and interviews.

One day he came home with the DVD of Season 1. Then Season 2. Both have been in steady circulation among my friends.

Then he came home with an Unofficial Downton Abbey Cookbook. Then he bought a new kitchen calendar that did not really fit in the space we had been using for a calendar for 16 years, but that did not matter because it was a Downton Abbey calendar. We rearranged the space.

So you can imagine I’m giggling with delight with the number of people who are reading The Pursuit of Lucy Banning or The Dilemma of Charlotte Farrow and comparing my books to Downton Abbey.

I wrote the first drafts of these books in 2009, long before I heard of Downton Abbey. So even I am surprised at some of the similarities.

But that makes me feel like I got a few things right, and I’ll take that!