No Longer Writing in a Flood Zone

Today we finish a summer series of guest posts. Welcome Kathleen Kovach, who also writes in partnership with Paula Moldenhauer. 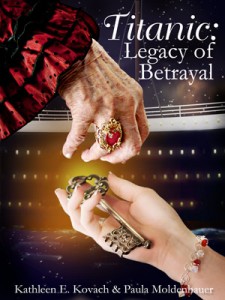 For the longest time in my early writing career, I claimed to be a seat-of-the-pants writer. That would be one who simply lets the story flood out of one’s head as one types. Which begs the question: Why isn’t it called a tsunami-out-of-the-head writer? What do pants have to do with it?

I tried to convince others, and mostly myself, that I had no left brain. That it had shriveled to the size of my eighth grade art eraser and that all my writing was fueled by my hyper-creative right brain. And who knows, maybe that was true at the time. But, my organization skills have multiplied since I stepped through the door marked “For Deranged Arrangers Only.”

It’s true. Back when the story would surprise me as it unfolded on the page, I wasn’t nearly the stickler for alphabetized spices and color coded t-shirt drawers that I am now. Something changed. I no longer fear plotting.

As I look back, I think it began when I had to submit a chapter-by-chapter synopsis for Barbour Publishing’s Heartsong Presents line. Not so much with the first one I wrote for them as I had written the entire story before I submitted the synopsis. It took me two years to write that book. Before that, it took twenty-three years to write my first story that has never been published. After that first contract, I soon realized if I wanted to write more books in a timely manner, I would have to learn how to plot so I could get a good working synopsis (chapter-by-chapter or otherwise) out to the publishers before the books were written.

The Dreaded Chapter-by-Chapter—which, by the way, is it’s official title, similar to the Dread Pirate Roberts—and it’s two-page single-space counterpart, used to, quite frankly, freak me out. How could a hyper-creative right-brained person like me ever boil my plot down to small bite sized paragraphs?

In my quest to learn how to plot, I found the Snowflake Method which was the springboard to creating my own style of plotting. As I took classes and ran internet searches on how to plot, I incorporated various methods, such as the Plot Skeleton, GMC (Goal, Motivation, and Conflict), and the Hero’s Journey. I now use all three of these in developing my plots with the help of a spreadsheet I’ve created called The Writer’s Toolbox. I have a series of outdated articles on my blog on this. The articles were written in 2009, but I’ve since tweaked the system. However, the principles are there. If you want to check it out, please visit my blog and scroll down to the labels on the right hand side. There you will see four articles titled “Organize Yourself as a Writer.”

This system was invaluable as Paula Moldenhauer and I co-wrote Titanic: Legacy of Betrayal. If we both had tsunamis frothing forth from our heads, this would have been a very messy book. As it was, we carefully looked at each character, each plot line, and developed a good working blueprint before we even started. Oh, did I mention that Paula is a tsunami kind of gal? I frustrated her often as I refused to write until I knew what direction our story was going. She tells people that she’s glad we did it that way. The story came out strong, and we didn’t have to go back often to fill in plot holes. That’s what a tsunami will do. It comes at you in a rush, and then when it ebbs, you see debris lying about that needs to be tossed. 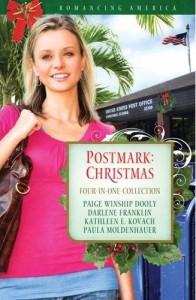 And since I’m shamelessly plugging books, Paula and I are both involved in a novella project that debuted this week. Postmark: Christmas is a fun anthology of four contemporary stories set in the real town of Christmas, Florida. Darlene Franklin and Paige Winship Dooly are the other two authors.

Since I’ve developed my Writer’s Toolbox, (which is called the ALL-IN-ONE-PLOTTING Workbook in the articles,) I’ve written five books. I’ve also organized my closets so the clothes all face one way and have categorized my DVD and book collections.

So, beware. If you become a plotter, the rest of your life just may march in a maniacally organized straight line.

Kathleen E. Kovach lives in northeast Colorado where she leads a critique group and is a member of American Christian Fiction Writers, serving as Rocky Mountain Zone Director. With a passion for movies, she has created Craft Cinema (www.craftcinema.blogspot.com) where she discusses movies through the craft of fiction. An award winning author of Christian romance, she presents spiritual truths with a giggle, proving herself as one of God’s peculiar people. Visit her at www.kathleenekovach.com.

Author, speaker, and mom of four, Paula Moldenhauer has published over 300 times. Her first two novels released in 2012. She serves as Colorado Coordinator for the American Christian Fiction Writers and homeschools. Paula loves peppermint ice cream and walking barefoot. Her greatest desire is to be close enough to Jesus to breathe His fragrance. Visit www.paulamoldenhauer.com for devotionals, parenting articles and book info.