Waiting for the Crash 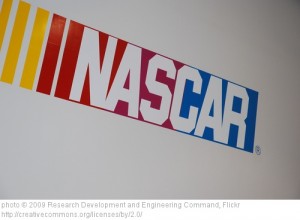 I’m the first to admit I do not understand NASCAR racing.

The pits look exciting—how fast the crew does its magic and gets the driver back on the track.

But going around a circle endlessly on a Sunday afternoon? I guess I’m a destination driver. The creeping cautions? All the flag business? The points? The cup standings?

I’m probably wrong. My son assures me I am. When he was a Cub Scout, his den leader always threw a Daytona 500 party. Gotta tell ya, I was bored every single year. But my kid, not so much. So we went every year. I ate a lot of chips and dip while people around me spoke NASCAR lingo. I was clueless.

Then he started tracking racing news and watching races and reporting standings to me and pinning string on a U.S. map on his bedroom wall to show where all the races had been in one season. It looked like a mess to me, but he knew the order of the cities the races had occurred in.

Despite my deepest desire to be an interested attentive mother, I just could not seem to devote brain cells to understanding NASCAR.

It didn’t matter. Somehow he found his NASCAR-watching buddy at church. For years they have shared a Sunday morning digest about Saturday night’s race before rushing home to the Sunday afternoon races. We don’t have cable, so as soon as he had a driver’s license—eight years ago—he was off to his friend’s house on the Sundays FOX did not broadcast the race.

So perhaps by now you are imagining a couple of teenage boys growing into young adults and watching races together.

His race-frenzy friend is the grandmother variety. I’ve dubbed her “RacyLady.” She also assures me there is far more to NASCAR than waiting for the crash—and she should know, because she actually goes to some races. My son, who stores strange statistics in his head, periodically sprays me with the numbers that prove the sport’s popularity. (We won’t go down the road of discussing whether racing qualifies as a sport right now.)

I’m grateful for RacyLady’s presence in my son’s life. She gets his quirky brain. She accepts him. She’s generous toward him. She loves him. And the two of them together teach me that we can’t draw lines around the relationships in our lives and expect that friendships must fit within the lines. Looking beyond what we have come to expect may bring the greatest moments of grace, joy, and love.

• What unlikely relationship brings joy to your life?