Erin MacPherson on: Three Writing Challenges That No Longer Scare Me 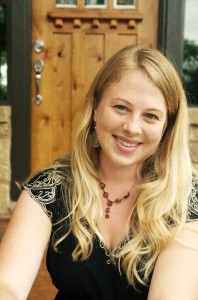 Today begins a summer Wednesday series from writers I’ve had the privilege of meeting in cyberland. Nine writers will tell us what no longer scares them (but must have at one time). Welcome Erin McPherson, author of The Christian Mama’s Guide to Having a Baby. She has several more books in the works.

When I got my first book contract, my husband surprised me by bringing home a Baskin & Robbins ice cream cake. It was some chocolate and cherry creation that was literally oozing with fudge and had word “Congrats!” scrawled across the top in big pink letters. Utter excitement in a pink paper box. And yet as my husband cut me a ginormous slice and placed it in front of me, I sat there, frozen, unable to take even one bite.

All of the emotions and fears and dreams and hopes of my career were crashing down on me in one single moment. I was excited—of course—but also terrified. Would I be able to write that book before my looming deadline and write it well? And after it was written, would I be able to sell it? It’s scary to write books—to put your work and your dreams out there for everyone to see. And as much as being published warrants a big chocolate-covered-cherry ice cream cake, it’s also scary. But I’ve grown because of those fears. It’s been more than two years since that piece of ice cream cake melted on that plate—two years of ups and downs and highs and lows. But now, as I work on my next books, I realize that I have come a long way. Here are a few of the things about the publishing and writing process that no longer scare me:

1.     Becoming a one-book wonder. I knew when I got my first contract that it was the opportunity of a lifetime. But I also knew that if my one book didn’t turn out to be as wonderful as I hoped it would be, it could be my only opportunity to be a writer. And that was terrifying. After my book launched, I remember several months when my emotions rose and dipped with my Amazon ranking. I felt like my entire future as an author was riding on that one tiny sales number. But it wasn’t. I’ve since learned to let go and let God—to trust that once I’ve done everything I can do to sell books, I have to trust God to do the rest and trust him with my future career.

2.     Getting a bad review. I poured my heart and soul into my book—and with so much riding on those carefully crafted words, I hoped that my readers would see my heart in the writing and give me positive reviews. And then that first one-star review came along. And it wasn’t pretty. The reviewer called me “whiney” and “obnoxious” (really, go read it on Amazon) and I was heartbroken. My confidence took a real hit. And then, to make things worse, I met a woman at a MOPS meeting who said to me “Wow, I almost didn’t read your book because I heard it was ‘whiney’ and ‘obnoxious’ but I finally did and it was actually pretty good.” I cried. Right then and there. And then I realized that I had to stop. One person’s opinion couldn’t define me, and one person’s harsh words couldn’t control me. Since then, I’ve gotten another one-star review. Another person hated everything I had to say. And another person told the whole world about it. I’m not going to lie: the second review upset me. But it didn’t crush me. I was able to look past it and realize that when someone doesn’t like my writing, it doesn’t mean nobody likes my writing. It’s one person. One opinion. And that can’t destroy me.

3.    Missing a deadline.  I was the person who sat at the front of the class in high school. I’m a people pleaser and a teacher’s pet and I would’ve never in my wildest dreams turned an assignment in late. So, when I got that first contract and saw a very (very) tight deadline, I resolved myself to finish that book and finish it on time. It was hard. I pulled several all-nighters. And I finished that book at the last hour, just in time for that deadline. My editor was, of course, appreciative, but she also told me that she was more than willing to give extensions and that there is never a reason to kill myself over a deadline.

Erin MacPherson is an author and mommy blogger who writes about life as a Christian parent at www.christianmamasguide.com