Surgeries that Changed My Life: Part 1

At the hospital admissions desk, I signed the forms before daybreak. A young woman slapped an I.D. strap around my wrist and sealed it. “No sedative,” she said loudly.

A man behind the counter furrowed his brow and came to look at the chart. “No sedative,” he repeated. The phrase echoed through the halls as each person who read my chart spoke it aloud.

Considering that I was about to have my heart messed with, the “no sedatives” note was absolutely noteworthy.

I’d been through all this before—except I had the sedative the first time. For decades, I had a condition in which my heart rate unpredictably but aggravatingly jumped to around 250. Not fun to feel or to get it to stop. Preventive medications did not help in my case, and it was happening more frequently. The condition, which has several varieties, is like having a second pacemaker, and #2 starts to argue with #1 about who is in control. Each one tries to out-beat the other.  I lived in fear of those moments.

Four months earlier, I’d had an ablation—a procedure where doctors zap tissue in the heart that conducts electricity where it should not be. This used to be open-heart surgery, but now it’s an outpatient procedure. Normally cardiologists manage it in a manner such that the patient remembers very little. Unfortunately, my body’s reaction to the sedative tangled with the doctors’ need to be able to manipulate my heart, and the procedure was not successful.

I knew the risks were higher the second time—I could end up with a pacemaker—but I still needed a solution to being afraid of my own heart.

Thus, the “No sedatives” note. I was awake the whole time, with a compassionate male nurse named Dan standing at my head, whispering to me and helping me stay calm. If anyone wants to know what it feels like to have tissue in your heart burning for 70 seconds at a time, let me know. I can tell you.

Later that day, I asked the surgeon how many of these procedures he had done with no sedatives (a question I probably should have asked first, I realize). His answer? 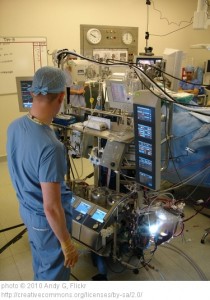 This is not my surgery, and probably not an ablation. Just a reminder of the serious set-up for any surgery.

“I’ve never done that before.” He knew I’d had two babies without drugs, so he figured I was tough.

This all happened on April 15, 1999. While the rest of the country was celebrating tax refunds or whining about tax payments, or protesting the entire tax code, I was taking a risk on my future. The procedure worked, and I’ve never had a moment’s regret.

Over the years as I’ve tried to explain what an ablation is, I’ve realized that people confuse the word with oblation. What a difference a vowel makes. One means removing or destroying, and the other means offering a holy gift to God.

Perhaps I was offering a holy gift to God in the decision to undergo ablation—twice.

Putting my life in his hands. Taking risks but trusting that God would be present in the outcome, whatever it was. Crying out, “God, I’ve had enough. Help me!”

Next Monday: Surgeries That Changed My Life—Part 2 of 4