How to Care About Everybody and Everything 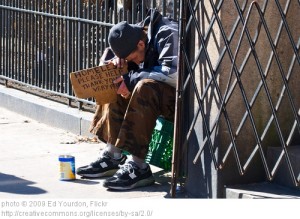 Three cars back from the intersection in the left turn lane, I was trapped by the red light. On the median next to me, a young man looked as if he’d had the fright of his life. And perhaps he had. His sign said, “Need prayer. Single dad about to lose apt. Anything will help.” The pallid shock in his eyes persuaded me to give him $10, the only cash I had with me. Clearly he could not believe his circumstances had come to this.

I admit, I don’t usually give money to guys on corners with cardboard signs. For instance, another guy has been sitting on the curb outside Target for about two years with a quite well-fed dog and a sign. Something makes me suspicious.

After that encounter with the shocked—and grateful—young man, though, I began pondering the weightiness of caring about everything. In addition to possibly homeless men on street corners, I’m supposed to care whether:

• the chocolate melting in my mouth might contain cocoa harvested by growers who were not paid a fair price, a process that traps them in economic bondage

• trash in the water is killing fish, or at the very least poisoning a fish I may someday eat

• television, movies and video games immunize us against the realities of violence

• AIDS is orphaning a generation of Africa

I could keep going, but the list heavy enough. How am I supposed to care about everything and everybody while I’m scrambling to manage my own life? Or harbor secret guilt that I don’t? There are no 1-2-3 answers. But here’s what I’ve decided to do.

1. Keep God’s kingdom values in front of me. Remind myself frequently that God cares about these things. Just because these horrors and complexities don’t untangle in one fell swoop does not mean God does not care.

2. Keep my heart soft. I may not be able to do anything personally about many of the items on this list, but that does mean I should harden my heart. It does not mean I should regard these injustices as acceptable in God’s eyes.

3. Keep responding. I felt a particular prompt to give that young man my $10. I could easily have talked myself out of it. But I saw his eyes, fear swarming up from his heart through them. I couldn’t pay his rent, but I could do this small thing and perhaps encourage him.