Good Friday Gone in the Night 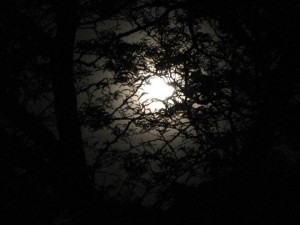 This piece first ran a few months ago, but because it is a story about Good Friday, I offer it again on this day when we remember the suffering and death of Jesus.

I took a seat in the sanctuary. Somber Good Friday organ music underlay the meditations of worshipers. Chit-chatting had been left outside the door on this holy night.

So I was jarred by the voice of a woman who came in a few minutes later, sat next to me, and started speaking in a Swedish accent.

“I hope this helps. I figured I would give God a chance.”

“It’s a meaningful service,” I said softly. This was not my home church, but it was a congregation I knew fairly well. This was to be a Tenebrae service. The sanctuary would grow gradually darker as we heard the gospel accounts of the crucifixion read aloud. Hymns and prayers would follow each thud of the story, allowing the weight of Jesus’ death to sink in.

“I can’t find anyone else to help me, so I figured I might as well go to church.”

She made no effort to whisper. A couple of heads in front of us turned.

I didn’t really know what to do. I had been to this service many other Good Fridays. It was emotional and dramatic, and that’s why I was there. To feel the weight. To put myself at the foot of the cross.

But this was not a service where worshippers would share their personal needs, or even shake the pastor’s hand on the way out. It would end in darkness and silence. We would leave without speaking after the final reading. Jesus would be in the tomb.

This woman next to me came to church with her own litany:

Yes, she told me all this before the first word of the service. She came to church, on this night of all nights, hoping that at least God might care.

Some situations make me feel as though I’ve been hit with a stun gun. I murmured some words of assurance that certainly God did care, and the service began. I prayed God would meet her that night with mercy.

She slipped out at some point.

I opened my eyes after a prayer in the dark and she was gone. Did she find that God cares—enough to watch his own Son die? Or did she decide she was not going to get any help at church either?

I don’t know the end of the story. Certainly her life was complicated. Plenty of plot, plenty of characters. But she felt helpless to defeat the obstacles and shape her own story.

Could I have done more? I don’t know. But I pray for her when I think of her still.