Antique Clocks and Dressers–With a Story

Why do people collect antiques? I know people whose homes are full of beautiful pieces of furniture that reach back through the decades. If they don’t reach back far enough, or if they are avocado green or mustard yellow, we just call them “retro,” which is a polite word for the early decades of my lifetime. But I’m talking about the ones with gorgeous oaken sheens (though “restored”) or perhaps knicked and scratched but with a great family story. I love old things with a story. 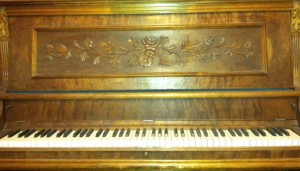 I have three bona fide antiques in my house. The first is an upright grand piano. We found it in the basement of a parsonage we lived in the 1980s. Clearly the church did not want it, and clearly it had been water-damaged. We asked them to give it to us and then we found a guy to take it apart. While he worked on the strings and hammers and keys, we worked on the cabinet.

When the keys were out to get shiny new tops, the piano expert found on one of them the signature of the two men who built the piano and a date in 1889. I like a piano with a story, even if the wood is scarred and buckled in places. (The poor thing fell off a truck once, but that’s a another story.) 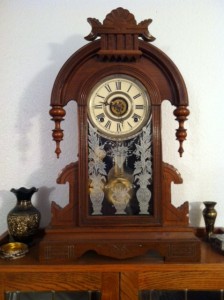 The second item is a wind-up clock. This came from my in-laws. For all the years I knew them, the clock never ran. When they gave it to us, my husband took it to a local clock shop. The guy there got it working. Periodically we have to have it cleaned, which is pricey, so I’ve come to understand why my in-laws just let it be beautiful without running. My husband has scoured the Internet for images and descriptions, and it seems fairly certain that it dates back to the very early 20th century or late 19th century.

This particular clock was a wedding gift to my husband’s great-grandparents, but the expert at the clock shop says the model was in production as early as 1880. That means that a clock similar to this could well have been in the home of my fictional family, the Bannings. (The piano could have been there, too, but Lucy Banning played a Steinway grand.)

The third item is a dresser, which also came from my in-laws. The family story is that it was built by—I think—my husband’s great-grandfather. We’re both fuzzy on who made it, though I remember my mother-in-law’s pride that it had been crafted within her family.

We’ve had the dresser a few years, but were not using the mirror. Recently we decided to take the mirror 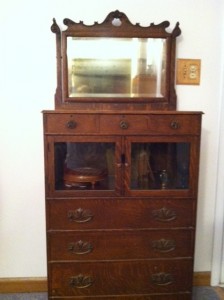 out of storage and discovered it doesn’t give a good reflection. Something about the flaking nickel plating behind the glass, quite possibly because our carelessness in the way we stored it. My husband’s dogged research suggests it was probably inexpensive Woolworth’s glass at the time the piece was made. We put the mirror up anyway. My husband is sure he can find someone to fix it, yet part of me is reticent. The cloudy image I see in the mirror reminds me that in this life we see a poor reflection of the life God has in mind for us someday.

My mother-in-law put cryptic notes on the back of some items she gave us over the years, but I wish I had paid better attention when she was explaining things. When we’re young, we’re looking to the future. When we’re old enough to appreciate information about the past—perhaps a sign of our own sense of mortality—the people who have the information may no longer be with us.

• What’s the oldest item you own? What do you wish you knew about its past?