First Glimpse of Allison Denman, heroine of Wish You Were Here

Today’s post comes from a writer I met online. We discovered we share a release date and are counting down to blast-off together. My book, The Pursuit of Lucy Banning, and Beth K. Vogt’s Wish You Were Here release May 1. I’ve talked about Lucy Banning in other posts. Beth is here to share with us her character, Allison Denman. 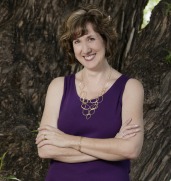 I first met Allison Denman, heroine of my debut novel Wish You Were Here, as she walked down a church aisle dressed in her never-should-have-said-yes wedding gown. Because I’d written the scene, I knew what Allison was thinking as she approached her groom:

The looming question? Would Allison say “I do” and become Seth Rayner’s wife? Reality: If that happened, then I was writing a short story, not a novel.

An even more important question needed to be answered: How did Allison get to this pivotal moment of indecision? The wedding was the first scene I wrote for Wish You Were Here. I had to develop my story both backward and forward—determining what propelled Allison’s doubts, as well as everything that happened once she reached the front of the church. In other words, the rest of the book. 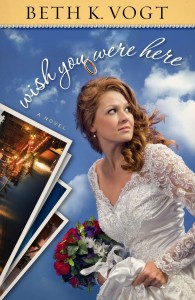 One of the components every novel must have is a character arc—meaning characters must change from the beginning of the story to the end. And discovering who Allison was on page 1 and who she became by the time I wrote “The End” was a favorite part of writing Wish You Were Here.

Allison thinks she wants one thing when you first meet her. By the end of the book she is able to admit she wants something entirely different. How does she manage this transformation? While Allison is a fictional woman—a figment of my imagination, if you will—she changed the same way you and I do: She confronted hurts from her past. She was honest about who she was, rather than trying to be who she thought she needed to be. And she embraced risk.

There is more to happily ever after than fairy tales ever tell us. As readers follow Allison’s story, they’ll be drawn into her wrestlings with the realities of love, mistakes, choices and forgiveness. Ultimately, Allison accepts who she is and what she wants—even as she admits that doesn’t always make life easier or simpler.

Beth K. Vogt’s contemporary romance novel, Wish You Were Here, debuts this May. Beth is a nonfiction author and editor who said she’d never write fiction. She’s the wife of an Air Force physician (now retired and in solo practice) who said she’d never marry a doctor—or anyone in the military. She’s a mom of four who said she’d never have kids. She’s discovered that God’s best often waits behind the doors marked “Never.” Join the conversation at Beth’s blog, In Others’ Words, at bethvogt.com.