How to Play Slow Pitch to Lose (And Win)

Time for slow-pitch softball? Can it be? 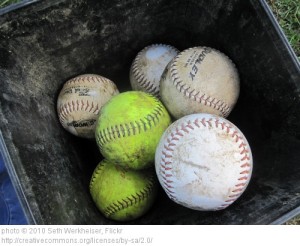 Last Sunday in church the person who organizes our church team announced it was time to get registered for the spring league we participate in.

And by “we” I mean the people who play on knees that need surgery, get their faces smashed on the pitcher’s mound, and slide the skin off their kneecaps. My cranky feet do not touch the field. I participate by showing up to cheer at every single game.

Last year, I missed a game. I don’t remember why. I’m sure it was a good excuse, because I rarely miss.

Now, my non-athlete husband has played for several seasons. He stands at the plate—where his best odds are simply to stand still and get walked—and actually swings. He trots out to right field—where the chance of anybody catching anything is remote—and actually runs after the ball.

Wouldn’t you know, in that one game I missed, he caught a fly ball in right field. And I didn’t see it. I did hear about that play for weeks from other players, because that’s the kind of team we are.

Our team teaches me lessons every year.

1. Keep believing. Me? If I were on the field, I would be a placeholder because each team must have two women. But hubby keeps believing he might hit a ball, he might catch a ball. It could happen. And one day it happened. (And they almost won that game. See #2.)

2. Celebrate small victories. Our team does not win games. That’s simple truth. I think maybe twice in the last five years have we actually won a game. (And one of those might have been a forfeit.) We measure our progress by whether we are decreasing the number of runs by which we lose from one game to the next. So when someone gets a hit or catches a ball or makes a double play without an overthrow, whooping and hollering ensue.

3. Pay attention. Sometimes the sun is in my eyes. Sometimes it cold or rainy (it’s a spring league, after all). Sometimes I get caught up in a conversation or watching somebody’s cute little kid. Always my backside goes numb against the permanent, unyielding cement seating. It’s easy to show up to cheer, and then not actually watch the game. I miss a lot of good stuff.

4. Don’t mind the score. Somebody up in a little box flips red and blue cards to show the score. Maybe players can see them from the field, but spectators can’t. And it’s probably just as well for us not to see the quantification of our slaughter. Instead we just watch the next play.

We know we’re pathetic—if you measure by our win-loss record. But other teams that play against us each year look forward to our matches not because they know it’s a sure win, but because they find us an amiable, fun-loving, supportive team with the best cheering section in the league.

So what’s my point? Find your role, choose your own measure of success, and then give it all you’ve got.

• What game do you want to get into?