On a recent jaunt by air, I was on a plane that backed from the gate, rumbled to the runway, and then stopped. A few minutes later, the captain announced that some gizmo or other was not working, and without it, we would have to fly at an elevation under 25,000 feet rather than above 32,000 as planned. The mechanics did their thing and determined that it was not a quick fix, so we returned to the gate for the extra fuel that flying at the lower elevation would require.

I have to say, I’ve never paid much attention to cruising altitude. I have an uncanny ability to be seated over the wing or an engine, so what’s to see? Besides, I prefer a not-so-claustrophic aisle seat.

This plane was a small one, with only one seat on the left side of the aisle. So I had a window seat and an aisle seat!

I’m used to being high enough that a) most of what you see is suggests you are inside a marshmallow and b) what you can see on the ground looks like Monopoly pieces. But flying under 25,000 feet was not that way. We did not encounter many clouds that day, and the lower elevation made many elements of the view identifiable. Okay, they still looked like Monopoly pieces, but close enough to pick them up and move them from Illinois Avenue to Park Place. 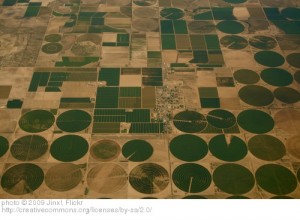 Why doesn't it feel like a circle when you're standing in it?

I saw the athletic fields of schools, the sprawling wings of nursing homes, the square, flat boxes of manufacturing plants, the rows and curves of planned housing developments (who are all those lucky people with pools?), those odd circles in varied colors of irrigation patterns, the country roads running for miles in between intersections.

And I thought about all the lives down there. People whose children do not like school. People choosing between the mortgage payment and patching the leaky roof. People who have nothing to wear to the company dinner. People with in-laws coming for Sunday dinner. People on their way to a wedding. People preparing to lay a loved one to rest

Life is not just about getting from zero to 32,000 feet so we can turn on our electronic entertainment and insulate ourselves. Life is happening down there. To a lot of people. Maybe we all ought to pay a little more attention to find the places where we can inject a dose of grace, compassion or exuberance.