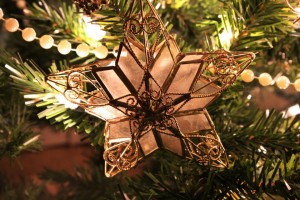 The family photo album shows me in my feetsie pajamas enamored of a pink cardboard kitchen set. Christmas morning, and I grinned at the camera. I remember the photo more than I actually remember the day. (But I do remember loving that pink kitchen.)

When I was ten, I made a list. Probably this was not the first year I made a Christmas wish list—my siblings and I used to devour the Sears catalog (remember those? I still have one), which seemed to us to be three universes of ideas. But the Christmas I was ten was the first year I got everything on my list—and was disappointed at the lack of surprise. Even now my family will tell you that I’m not very good at giving out hints.

When I was thirty-four, Christmas Eve was a Sunday. My table was set for my sisters and their families to come for dinner after morning services at our various churches. Food was warming in the oven. They ate without me.

I was in the hospital. Turns out, when you’re six months pregnant and have a racing heart, you go to the front of the line at the ER.

I think the reason my heart continued racing all day and all night at the hospital was because I was so annoyed at missing Christmas Eve candlelight service. I also missed Christmas morning with my two year old at home. The cardiologist who saw me on Christmas morning called me “hostile.” (Maybe I was, maybe I wasn’t.)

Now that I’m (covers mouth and mumbles here), my kids and I exchange memories. They were six and eight when we moved to this house. They told me the other day that they don’t remember any Christmases before this house. (And yes, I delivered on the rice pudding and corn casserole that have been on the table every year they can remember. And no, they did not agree to open gifts on Christmas Eve.)

On Christmas morning, I love to go to church and hear the gospel read from the first chapter of John. When I hear the words of verse 14, my heart feels like it’s going to split open. Every year. “The Word became flesh and made his dwelling among us. We have seen his glory, the glory of the One and Only, who came from the Father, full of grace and truth.”

Full of grace and truth.

This is the day after Christmas. For a lot of people, the air has already gone out of the season. Christmas is so yesterday.

Not me. “Full of grace and truth.” I can ponder those words the entire year, and still ache to hear them again next year. They mark my years, as I pray God’s grace to live in his truth.