A Victorian Christmas on Prairie Avenue

Four days till Christmas. Are you rrrready?

I’ve mentioned before that I had a terrific research partner while I was writing the stories for the Avenue of Dreams series. Stephen Reginald is a docent for the Glessner House Museum on Prairie Avenue in Chicago. The museum does an elaborate rendering of Christmas at the Glessner home. While we were writing, Steve sent me some notes that transport visitors into the late nineteenth century, based on docent training he underwent for the season. I just found them again. He said: 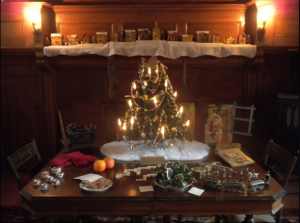 Miniature Christmas tree in the schoolroom of the Glessner House Museum

“As was true in most American homes in the late nineteenth century, the Glessner’s first Christmas trees were small two- or three-foot high Balsams or Douglas firs set on tabletops. In an 1888 journal entry, Frances Glessner described some of the Christmas preparations for the family’s second holiday at 1800 S. Prairie Avenue: ‘The children are today trimming a Christmas tree in the school room. We all hung up our stockings and trimmed our pretty little tree just three feet high…’”

The taller trees we would expect in the mansions of Prairie Avenue became commonplace shortly after this picturesque journal entry. Steve said: 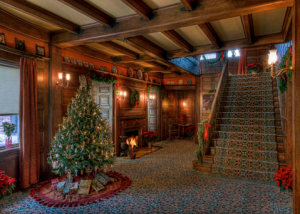 The main hall of the Glessner House Museum decorated for Christmas 2011.

“The Glessners cut their Christmas tree each fall at The Rocks, their summer farm in New Hampshire, and shipped it to Chicago by rail. They placed a tall tree in their entry hall each Christmas at least by 1900, when family journals mention a tall tree in the hall.” The picture here is what the tree looks like this year. In the tradition of the Glessner family, the museum’s tree is shipped from The Rocks, a portion of which now operates as a Christmas tree farm.

Early decorations may have been modest, but Christmas dinner was not. Here is a menu served to nine guests in 1895:

• First course: oysters on the half shell, brown bread and butter

Eight courses. Um. I’m not used to counting that high during a meal. But I suppose we all go overboard for Christmas dinner.

Whether you’re going overboard with gifts, lights, decorations, music, or food, I hope it’s because you’re grateful for God’s abundant love for you, expressed in the gift of his Son. Celebrate with the people who bring joy to your life.

• How far back can you trace your favorite Christmas tradition?