Museum of Wonder and Curiosity 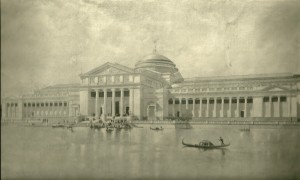 The Palace of Fine Arts from 1893 Youth Companion

I grew up in a suburb of Chicago tucked under an east-west runway of O’Hare. School field trips invariably involved the Museum of Science and Industry in Chicago. On any given school day, hordes of kids from all over Chicagoland rotated through exhibits. And the cafeteria, where we ate the lunches we carried from home in carefully labeled brown paper bags. No lunch boxes allowed. It’s a wonder every teacher in three counties did not go bald by the end of the day.

It was the Museum of Wonder and Curiosity for me. Massive building. Cool exhibits. Lots and lots of information to read. I always hoped I would be assigned a “buddy” who would linger long enough for me to read to the end.

Thirty years later, as a mother of young children, I found myself living in Chicagoland once again. My husband and I scoped out the free days and took our kids to the Museum of Wonder and Curiosity, er, Science and Industry. They were too little to remember, but I was anxious to share this fabulous place with them.

But you know what it seems I never wondered about? The history of the building itself. As a child, it seemed self-evident to me that it was a museum. So many museums are massive stone structures, after all.

Two years ago I realized that the Museum of Science and Industry is one of only two buildings that remain from the World’s Columbian Exposition of 1893—the world’s fair. In October of 1892, this massive building housed the opening ceremonies of the fair, with seating for 80,000 spectators. By May 1893, the great hall showcased manufacturing wonders of the day. (The image above was scanned from a 1893 edition of the Youth Companion by Stephen Reginald, who helped dream up the Avenue of Dreams series and was an invaluable help with research.)

So I wandered the acreage of this building as a child. I wandered again as a mother. And I wander once again as an author of a series set against the backdrop of this world’s fair anchored by the big white building.

I suppose one of those signs I read when I was eight told me the building was erected for the fair. I couldn’t be expected to remember everything I read on those field trips, could I? Either way, I’m glad to be once again wandering through the exhibits with the characters of the Avenue of Dreams series.

• What childhood field trip do you remember? Have you been back to that place as an adult?