Can You Smell the Dressing? 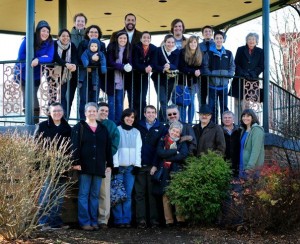 Today I’m offering up a Thanksgiving post written by my sister-in-law a couple of years ago. I was the missing sibling the year she wrote, but as you read this year, I am whizzing across several states on I-80 for a gathering of what we hope will be all seven siblings and my mom–along with too many grandchildren and great-grandchildren for me to count at the moment. Enjoy this glimpse into my family through the beautiful words of Brenda Martins.

I’m pondering the mystical two-sided coin of separation and unity. I have been absent for a third year in a row from my side of the family’s California Thanksgiving celebration. There I am the baby of four sisters, but my role in the central time zone is as the eldest among siblings and mates at the Chicago festivities of my husband’s family.

Having promised the Kingdom of Chocolate as my contribution to dinner, I brought pie to the festivities here—pecan with chocolate chips—that is my California brother-in-law’s favorite, along with a chili chocolate torte that none of my family yet knows exists. I also made fresh cranberry relish, while my in-laws here bemoan the lack of my mother’s traditional cranberry sherbet I would usually bring to the feast. Yet, the smell of my grandmother’s onion dressing baking in California kitchens most certainly crossed the country’s atmospheric borders of two time zones.

We ate gratefully and heartily in Illinois. Wine glasses and coffee cups sang in our hands as, I imagined, my family in California continued their tradition of grabbing theirs after dinner to walk through the neighborhood, over an enchanted bridge, to a school playground, where grandchildren have been known to swing and climb until almost too dark to get home. We frolicked in the hamlet of Woodstock, IL today. I couldn’t help musing on how all three of my sisters and I would have wished to have been present at the festival of the same name!

These past two days, I held and made eyes at my granddaughter, while in California, my sister’s newest grandchild was welcomed and properly photographed through the keen eyes of a niece. One sister-in-law was the only sibling missing here, but she was somewhat nearby with a Facebook greeting. Our oldest daughter was away from our arms as well.

The specter of our mothers’ aging, heart-aching lives looms large for both families. My fragile mother has not made the trip from the central California valley to the Bay area Thanksgiving for several years. Dan’s mother is always present here, but shares with my mother the pressing weight of the lack of a co-host and a capable and supportive companion at such events. Both Maynard and Elson died with Alzheimers. In and through their lives, they both graced their precious families with humor and a love of life together—and the amazing gift of being able to fix or build anything needed for the event. The next generations have taken up their mantles now, including sons, sons-in-law and grandchildren. But the hole these two men have left in spousal hearts and at festive table is unfixable. “Mind the gap” comes to my mind, not to avoid falling in it, but to be tenderly mindful.

Also missing this year’s feast here were our son and his wife, who, at this moment are closing gaps, forging links during a two-week trip to Brazil. Elson, the patriarch of the U.S. clan, was the only one of his family to leave that homeland. From Rio to Sao Paulo to Bahia, my son and his wife will sit at table with the Brazilian family they became part of during his master’s studies there a few years ago. They have before and will again eat, hug, laugh, kiss, converse. I wonder: can they smell the mystical onion dressing from there?

Love happens in spite of and even through distance. Life cycles and swirls around us, making us one and making us miss being one. The being and the missing are all part of the whole. And I suppose it’s meant to be that way.