Why I Love Old Newspapers 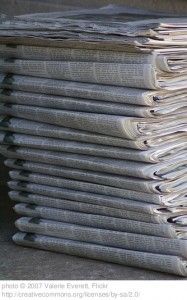 I suppose we’ve all heard about the person who stacks up newspapers from floor to ceiling, intending to read them someday. (Pull your toes in if I’m stepping on them.)

Newspapers are fighting for survival. The thirst for information is still there. In fact, it’s exponentially more enormous. But the way people quench their thirst has changed.

It used to be that if I wanted to look at old newspapers, I had to go to a library and be fairly specific about my request. Which roll of film did I wish to view? That always flustered me. How was I supposed to have an inkling where the tidbit I sought was stored? Or what the tidbit was? Don’t get me started on trying to make the microfiche machine like me. (And if you don’t know what microfiche is, you’re on the other side of a generation gap.)

Now I sit in a comfortable chair at home with my computer in my lap and search the archives of the New York Times by whatever phrase occurs to me. All the way back to 1851. The Chicago Tribune archives go back to 1852.

These archives reach into to the first century of the United States as a nation. And I can read them for myself.

So many perfect details come into focus and lure me in deeper to my own story. It almost makes me understand wanting to stack newspapers up until I can read them.

When I was researching for The Pursuit of Lucy Banning, I used both the Chicago paper and the New York paper. Both covered the events of the 1893 world’s fair in Chicago. The Windy City was coming into its own as a major competitor to the Big Apple’s premier status. I could sense that even as I read competing coverage.

I have to admit I don’t read a print newspaper anymore. Still, I feel sad about newspapers going out of business. Each edition is a snapshot of life on that day, and it fascinates me to distraction to indulge in wondering about this or that. I’m grateful that when the digital age arrived, someone thought to put newspapers from 1851—surely fragile and yellowed and stacked in a basement—online to feed my curiosity about long ago times.