My Feet Hurt. Who Cares? 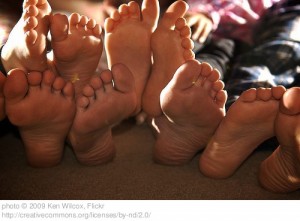 Last spring I showed up at a doctor’s appointment with a two-page document entitled, “The Story of My Feet.” I’m a novelist, so I told a story.

I was there because my blood pressure was up. But before the doctor (with whom I have a positive relationship) threw more meds at the symptom, I wanted to put on the table what I thought was the cause.

This was not the first time I complained to a doctor that my feet hurt. It had been going on for twenty years. Yes, twenty.

This was no way to live.

This doctor sent me to another doctor. I handed him the same history and said politely, “I’ll just be quiet while you read it.” He was puzzled by my history, but he could see I was hobbling, so he suggested a couple things. Oddly, putting one foot in a walking cast increased my mobility more than I can calculate. I wore it happily for months.

Eventually, opinions lined up under the heading of neuropathic pain, meaning my nerves are not providing accurate information from my feet to my brain. Now we were getting somewhere with knowing how to medicate the pain.

Why should you care about my feet? Only so far as they remind you of something in your life. Sometimes we think we’re communicating quite clearly—like all the doctors I complained to over the years—but nothing changes. It might be physical. It might be emotional. It might even be spiritual. Nothing works. We’re tempted to quit. We’re tempted to settle for rolling around the house on a little chair and avoiding real life.

Don’t. Try again, a different way. Advocate for yourself. Don’t give up on joy. Ever.

Yes, my blood pressure came down. Most likely pain will be my companion for the rest of my life. But it is not going to determine my path. I’m chasing the joy.