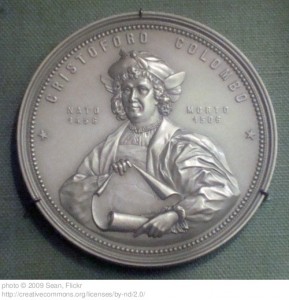 If you’re anywhere near my age bracket, you grew up thinking Christopher Columbus was about the bravest, most adventurous person who ever lived. He discovered a new world, after all.

If you’re younger than I am, you may have learned little more sophisticated view of history. It turns out the new world was there all along—with people, and families, and love, and art, and culture, and everything that makes life rich. Just not European.

Whatever you think of Columbus (and we don’t need to debate that here), his voyages changed history. Cultures clashed. Goods and plants and ideas and people crossed the ocean on a scale never achieved before.

Maybe you learned the little ditty in school. “Columbus sailed the ocean blue in fourteen hundred and ninety-two.”

That’s the history lesson. Now for some math. (Stay with me, word people.) Add four hundred. Now we’re in 1892.

October of 1892 brought the dedication ceremonies of the World’s Columbian Exposition—a world’s fair celebrating the four hundredth anniversary of Columbus’s voyage to the Americas. (See how I slipped us right back to history?)

Why do I care about all this?

Because the World’s Columbian Exposition is the historical backdrop to my Avenue of Dreams series, which begins with The Pursuit of Lucy Banning in May 2012.

The fair did not actually open until the spring of 1893. Chicago put on a good show. An astounding show, actually. Up until then, nothing like it had been done.

The fairgrounds covered six hundred acres with two hundred new buildings, all in the same white plaster. “The White City,” they called it. The fair was built on land that was not technically there even in the early planning stages. Land was dredged from the waters of Lake Michigan and then filled in with manure (hello, the famous Chicago stockyards) and dirt to ensure Jackson Park’s elevation would be above flood danger from the lake.

You’re probably glazing over about now, so I’ll stop. I would lose you on the architecture lesson.

Through researching for my stories, I’ve come to appreciate the impact this particular world’s fair had on architecture, art, industry, and the American spirit. And it all started with Christopher Columbus.